‎(NOT DFW) The System that moved through NTX promting a Severe Thunderstorm Watch for all of North Texas, however only effecting Central Texas yesturday afternoon is now moving across the South Eastern US, and posing a significant tornado threat to parts of northern Alabama, extreme north eastern Mississippi, southern Tennessee, and north western Georgia. Around 12pm the SPC upgraded those areas across these states to a Moderate (4/5) risk for an increasing tornado threat this afternoon and evening, raising the already fairly significant 10% on the tornado risk outlook to a significant 15% chance for tornadoes within a 25 mile area within the outlook area. As of 2:12 the SPC announced a likely tornado watch to be issued shortly across these areas. Within this outlook areas people need to be weather aware, not only for the threat for potentially some significant long track tornadoes, but also for the very large hail threat (golfball- baseball sized) with storms, and damaging wind threat. If you know people in these areas please tell them to remain weather alert this afternoon! The greatest tornado threat will be from 3pm-10pm. We recomend you stay tuned to your local news and NWS media and broadcasters for the very latest, and that you have some way of receiving warnings throughout the afternoon if you are in these areas, or know someone who does. 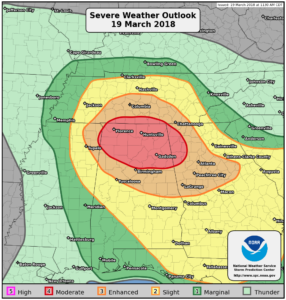 Statement from the SPC regarding the tornado watch to be issued-

SUMMARY…Tornado watch will be issued by 21z across portions of the
Mid-South. A few strong tornadoes are possible in addition to large
hail.

DISCUSSION…Leading edge of mid-level drying/cooling is progressing
across the MS Delta region at roughly 35kt. Over the next few hours
lapse rates should adjust across western TN/northeast MS and deep
convection is expected to expand in response to this feature.
Conditions are becoming increasingly favorable for strong supercell
development as boundary-layer moisture is advancing into northern
MS/AL with mid 60s surface dew points now evident at TUP into
Winston county AL.

Early-day thunderstorm cluster that spread across northern MS is now
into northern AL and this convection may impede deeper moisture
surge into the Middle TN region. However, a well-defined and
increasingly buoyant east-west boundary draped across northern MS/AL
should provide a focus for potentially tornadic supercells. Shear
profiles are becoming quite strong across this region and it appears
discrete storms will evolve over the next few hours in response to
approaching short-wave trough. Environmental parameters appear
supportive of potentially long-track tornadoes and this will be
addressed within the next few hours with a tornado watch.