Good morning north Texas! We’ve got a few things to mention weather wise as we go throughout today and head into Tuesday. Tuesday there is a chance for some strong storms, as well as potential flash flooding issues. To begin there’s two scenarios that could play out tomorrow.

The first scenario would be a line of storms over west Texas in the early morning hours would reach close to the metro or the western half before diminishing, with a second round developing in behind the first in the afternoon hours across the metro and into eastern Texas into the evening. The things we’d have to watch for with this second line would be for the potential of isolated “cells” developing out ahead of the main line, these cells may become super-cellular in nature and bring the threat for a spin up tornado or large hail. Damaging winds would be the biggest threat with the line of storms. Heavy rain is very likely and could lead to some potential flooding issues with either scenario. 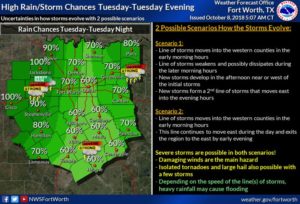 Scenario two would be that the morning line of storms would just push through and linger across the area throughout the day before pushing out of the region that evening. The main threats then would be damaging winds, frequent lightning, and heavy rain

The SPC has placed much of the region under a slight (2/5 yellow outline) and a marginal (1/5 green outline) risk for Tuesday. As previously mentioned there’s no guarantee for severe storms in either, and one outline doesn’t mean storms will only effect those areas and not other areas not shaded or in a lesser risk, SPC outlooks are determined by where we think the greatest coverage of stronger storms will be located, however weather can effect any area so don’t think if you’re in a lesser risk that it means you wont see any storm activity. Damaging winds of 60-70mph appear to be the primary threat with the strongest storms tomorrow, however a low threat for a spin up tornado and threat for  some large hail near quarter sized or slightly bigger cannot be ruled out as well. Over all timing (AS OF NOW) would be from 7am-7pm for both scenarios however please stay tuned for better information as we head into tomorrow.

As mentioned earlier in this post flash flooding may become an issue for some areas tomorrow as well. Similar to SPC outlooks the WPC (Weather Prediction Center) has issued their own outlook for “excessive rainfall” based on where they believe the heaviest rain coverage will be located, as well as potential flooding concern. Most of NTX is under a slight (2/4 yellow) risk for excessive rainfall activity, but there are some of our northern areas under a moderate (3/4 red) risk for excessive rainfall which could lead to flooding. Between 1-3″ of rain is possible with storms tomorrow, however the heaviest amounts of rain as of now appears to be for areas along and west of I-35

Now would be a good time to just check back on your flash flooding and severe weather safety tips. To ease fears this is not a “major” or concerning set up at all, there’s just a slight risk for some general severe weather risks, nothing historical or anything of that nature. And when we talk about the tornado risk for tomorrow the threat is LOW! We just have to mention the risks because there is a risk, and we’ll have to keep an eye on it. However this does NOT mean you should let your guard down tomorrow. Stay tuned 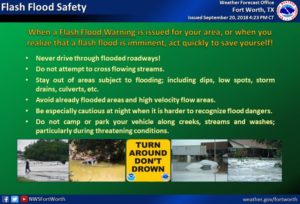 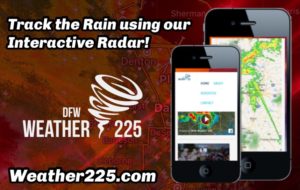 Enjoy the day, and check back for the latest. For rain/storm activity today however you can always use the free interactive radar on our home page 🙂