Good Morning NTX, as previously mentioned storms will be possible this afternoon along with fire weather conditions. First off the SPC has elevated the outlook to a (2/5) Slight risk today that now covers parts of DFW and much of north east TX. Hazards with storms today will be Damaging winds, and an isolated tornado can not be rolled out. Isolated areas of small to marginally severe hail will be possible with any isolated cells, however hail is not a primary concern. 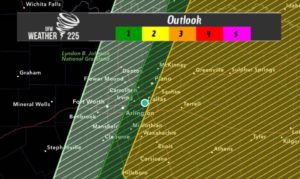 Timing for storms today will be from 3pm-7pm this afternoon and evening. Should you cancel weekend plans? NO! For the western half of the region you could see a few showers however those areas will stay mostly storm free, the bulk of the activity should develop and effect only from central DFW and off to the east. Before going out to do any activities just be sure you’re checking the weather periodically just to be weather aware. You can always get the latest on our Twitter feed, or Instagram and Facebook. 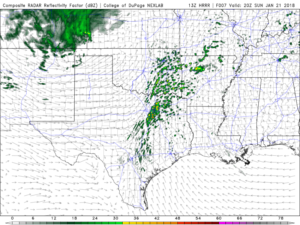 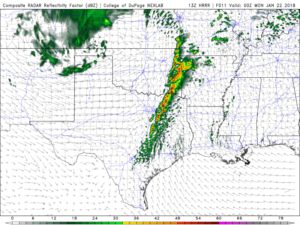 Forecast summary from the SPC bellow-

…SUMMARY…
Severe thunderstorms are possible late this afternoon into tonight,
mainly across southeastern portions of the Plains into the Ozark
Plateau region. Damaging wind gusts are expected, and a few
tornadoes may occur also.

…Synopsis…
Mid/upper levels will be characterized by a progressive/split-flow
pattern, the splitting feature being an intense shortwave trough and
closing cyclone now located over the UT/CO and AZ/NM border regions.
The associated/deepening 500-mb low is forecast to reach western KS
by 00Z, with trough south-southwestward over the southern High
Plains/Llano Estacado, to far west TX. By 12Z, the mid/upper
cyclone center should reach the MHK/TOP region, with trough across
south-central OK to central TX.

Surface analysis at 11Z showed an elongated area of low pressure
straddling a frontal zone from central KS across the northern TX
Panhandle to the RTN/TAD area. A strengthening warm front was drawn
from central KS across northern MO, slowly replacing an older
warm-frontal branch over southeastern KS and the Ozarks. A cold
front extended from the RTN/TAD part of the low-pressure area
generally southward across eastern NM. A dryline was drawn from a
frontal intersection over south-central KS to northwest and
west-central TX, and northern Chihuahua.

As the mid/upper cyclone approaches the central High Plains today, a
more-coherent surface cyclone will consolidate across parts of
central KS, moving northeastward across northeastern KS and far
northwestern MO overnight. The warm front should move/develop
slowly northward over northern MO and central/northern IL. The cold
front will overtake the dryline today and this evening from north to
south across OK/TX. By 12Z, the cold front should reach eastern MO,
central/eastern AR, the upper/middle TX coast, and deep south TX.

…Central/east TX to Ozarks and lower MO Valley regions…
From late afternoon through evening, convection should develop/
deepen gradually and evolve a line of thunderstorms from central/
east TX across southeastern OK, western AR and southwestern MO.
Activity then will move eastward across the Arklatex region,
western/central AR and Ozarks through the overnight hours. Damaging
wind will be the primary severe mode. An occasional tornado cannot
be ruled out with either supercells early in the convective
evolution, or QLCS mesovortex/LEWP/bowing features attendant to the
primary convective band. Isolated, marginally severe hail also is
possible.

An incompletely but sufficiently modified western Gulf air mass
should spread northward across the region today, characterized by
surface dew points in the 60s F and abundant low cloud cover to
limit diurnal/diabatic surface heating. With the front still west
of most of the moist sector, the strongest low-level forcing and
deep-layer/large-scale lift will not impinge on the moist sector
until this evening. However, gradual deepening of convective plumes
will occur east of the dryline and front this afternoon, in a zone
warm advection and low-level convergence. This process, amidst
slowly eroding CINH, should lead to parcels reaching LFC and
initially isolated to widely scattered thunderstorms by around 00Z.
Given the positive tilt of the mid/upper wave, the related geometry
of winds aloft will lead to a substantial component of mean flow
parallel to the developing convective corridor, contributing to a
short-lived transition from discrete to quasi-linear mode.

Forecast soundings show modest low/middle-level lapse rates in and
near the 15%-wind/slight-risk area. Still, sufficient theta-e is
forecast for prospective storm-inflow parcels to be effectively
surface-based here, thanks to antecedent and ongoing warm advection
and moisture transport. Nearly saturated low-level thermodynamic
profiles should result, with MLCAPE 300-800 J/kg predominating and
locally/briefly higher values. Low-level and deep shear each will
be quite favorable, as is typical with progressive cold-season
cyclones. Preconvective SRH commonly should reach 200-300 J/kg,
measured through both effective and 0-1-km layers. Although the
strongest winds aloft should lag just behind the surface front this
period, 40-50 kt effective-shear vectors reasonably appear in planar
progs and forecast soundings. The severe threat should diminish
gradually through the night as the warm sector narrows from north to
south ahead of the frontal/convective band, though isolated
severe-wind potential may extend to near the end of the period.

You can read the forecasts from the SPC on www.spc.noaa.gov

Aside from the storm threat, critical fire weather danger will be in place for our western areas. Please avoid any outdoor burning activity! For more information on Fire Weather safety please visit www.nws.noaa.gov/om/fires or www.ready.gov/wildfires 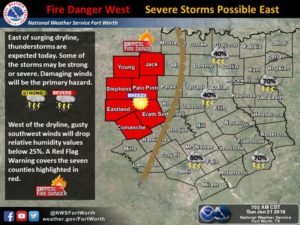