Good afternoon NTX, quick update for tomorrow. The SPC has shifted the (1/5) marginal risk for storms further west and now includes parts of central eastern DFW. A few potty showers will linger across area mid morning to mid afternoon, however the timing for thunderstorm activity would be from 4pm-8pm tomorrow evening. The main threat as of now would be strong to damaging winds. Activity should stay east of the DFW metro area 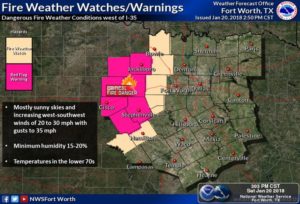 Aside from the potential storm threat a red flag advisory was added on top of the fire weather watch for Young-Jack-Stephens-Palo Pinto-Eastland-Erath-Comanche. Please AVOID outdoor burning if you are in the Watch or Red Flag Warning and contact local authorities if you come across smoke. For more on fire weather safety please visit www.ready.gov/wildfires or www.nws.noaa/om/fire

Stay tuned for the latest.

SPC Outlook in the text bellow. You can view the full SPC outlook on www.spc.noaa.gov –

…SUMMARY…
Isolated severe thunderstorms are possible Sunday afternoon and
evening from east Texas into southwest Missouri. A SLGT risk may be
warranted for portions of this region if instability is greater than
currently expected.

Latest short-range model guidance continues to suggest a strong
southern-stream short-wave trough will eject across the southern
Rockies to a position from western KS into west TX by 22/00z as an
intensifying 500mb speed max translates into OK. In response to this
feature, low-level trajectories will become increasingly favorable
for modified moisture to advance inland across TX before advecting
into the mid-MS Valley ahead of the short wave late in the period.
However, moisture is expected to remain somewhat limited across the
warm sector due to the disruptive influence of the short-wave trough
that is currently ejecting across the northern Gulf Basin. As a
result, a narrow wedge of 50s surface dew points are expected to
return as far north as eastern OK/western AR into southwest MO prior
to frontal passage Sunday evening, with lower 60s dew points
primarily limited to east TX/southern AR/LA.

As the trough shifts east it appears strong boundary-layer heating
will develop across the southern High Plains into central OK during
the afternoon and this should steepen surface-3km lapse rates along
a pre-frontal corridor into eastern OK by 21z where values may
approach 9 C/km. It appears surface-based convection will develop
along a surging dry line over eastern OK/northeast TX between 21-00z
and a strongly forced line of thunderstorms should mature along the
wind shift by early evening. Forecast soundings across the MRGL risk
region suggest near-surface based convection can be expected as far
north as southwest MO. Given the strongest large-scale forcing for
ascent will be maximized over the mid-MS Valley (240m 500mb height
falls during the day) there is reason to believe an organized squall
line will advance across eastern OK/northeast TX into AR/MO region
after dark. Strong frontal forcing favors linear storm mode and
damaging winds are the primary threat, especially as 500mb flow
intensifies to near 100kt during the latter half of the period. Even
so, a tornado or two can not be ruled out as forecast shear would
support organized rotating updrafts. Have opted to maintain 5%
severe probs given the relatively benign thermodynamic profiles, but
a SLGT risk may be warranted if expected buoyancy improves.