Good morning NTX. Today we’ll start the day with mostly cloudy skies and temperatures in the mid-upper 60s. Some showers as of 8:24am are skirting across our red river counties. These are non severe 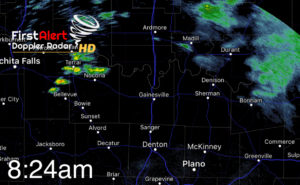 Later as we head into the afternoon some strong to possibily severe storms could develop for areas along and west of I-35 where a (1/5) Marginal Risk for storms has been placed for areas west of the immediate DFW metro area. However this outlook does cover parts of our areas NW and north of DFW from Grayson, Cooke, and parts of Denton counties. 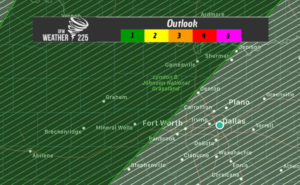 Hazards with any storms that reach strong to severe limits would be, hail around or slightly larger than 1”, damaging winds, heavy rain, and frequent lightning. The tornado threat is very low, however it is not zero, and there is a low end threat on the SPC outlook for areas from Bowie, to Jacksboro, to Breckenridge and areas west. Storm activity today looks like it should remain isolated so not everyone will see storm or rain activity. Coverage is expected around 30% 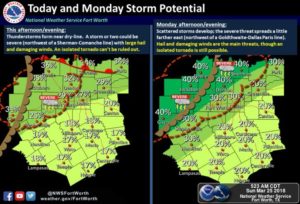 Later tonight a few stronger storms may reach closer into NTX as a front and dry line approach. However slightly better chances for storms will be in place tomorrow through Tuesday. These storms would also have a threat to produce large hail, damaging winds, localized heavy rain, and frequent lightning. Track the activity with the radar on our website!