As previously mentioned its Spring in NTX, that means that storm chances will become more of a common occurrence. Starting tomorrow slight rain chances will be possible across the area, mainly for areas north and along the red river, with coverage expected to be around only 30% mainly in the evening. 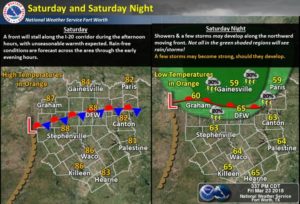 Sunday Storm chances will begin to increase, mainly for areas along and west of I-35, where the SPC has placed a Marginal (1/5) risk for storm activity west of the immediate DFW Area. As of now we cant for sure what the risks associated with storms will be, however this appears it would have mainly a large hail and damaging wind threat.

Monday and Tuesday we’ll have to keep an eye on as the SPC has issued a day 4 and day 5 outlook. As of now conditions look to be more favorable as we start off the week Monday and Tuesday for storm development as a dryline pushes through the region.

Once again its to early to determine exact threats and the likelihood of storms for Monday and Tuesday, so check back for updates as we approach the start of the week, we’ll be keeping an eye on the forecast. Another potential hazard to be aware for will be the potential for heavy rainfall across the area. The WPC day 1-7 rainfall totals show now 3-5″ of rainfall across the area over the next week. So Isolated Flash Flooding could become an issue in some spots that experience heavy rain.

Until then enjoy the weekend with highs in the 80’s partly cloudy skies.