You’ll hear CAPE, and Cap with some forecasts here and around the internet during storm season, and they can be confused for one another by some, or are a foreign language to any with little weather knowledge (which isn’t a bad thing if you don’t know). So
what are the two?

Well CAPE (Convective Available Potential Energy) is a measure for the amount of energy available for storm convection. It is related to the maximum potential vertical speed within any updraft. The higher the values, the more likely for severe storm development 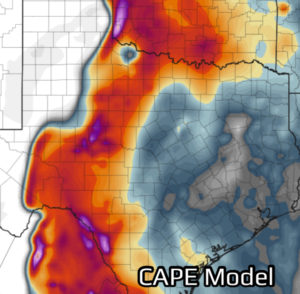 While the Cap or (Lid) is a layer of warm air aloft usually a few thousand feet from the surface, that puts storm development on hold or stops storms from forming to an extent. Its action is like if you were to put a lid on a pot of steaming food, limiting the steam. When a cap is said to be strong it means its temperature aloft is more increased than the temperature at the ground level. When a cap is said to be “weak” or on the verge of breaking, that means that there is only a slight temperature difference between the ground level, and air aloft. Cap’s are usually the main factor for some forecasts here in the DFW metroplex during severe storm season, as many of you can probably name several occasions over the past years when a forecaster has mentioned something like “lets hold the cap holds” or something like that. A cap is the difference between a clear day, or day filled with damaging storms, as its influence in some cases can control the outcome of a forecast. Caps are strongest during the overnight and morning hours, however they are weaker during the afternoon hours when day time heating starts to rival the temperatures aloft, as daytime heating can often increase lift, and instability in the atmosphere. Often times when a strong cap is in place and you see towering storm clouds try to develop, you’ll see them grow to an extent before their tops start to become flat, and almost spill over like an invisible force is pushing back down on the cloud, this is when the trying to develop storm hits the cap, and the cap holds its development at bay. This is really cool to watch live in my oppinion! 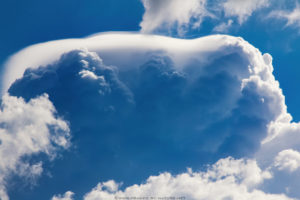