5:45pm radar update. Storms are now beginning to form into a line as they exit the metro area and move into eastern NTX. Storms are not warned as of now, but are still capable of producing small hail strong winds and heavy rain. we saw several reports of nickel to pea sized hail across the metro as this line moved through, we saw nickel to just slightly smaller than quarter sized hail here in North Irving as the line moved through around 4:55pm.  A tornado watch remains in effect for eastern NTX, stay weather aware, storms aren’t over yet for eastern NTX! 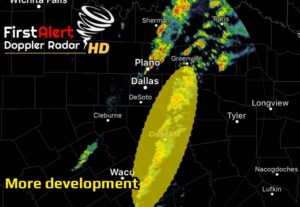